My biggest Dartmoor challenge EVER - Blog 13

Only 115 days left before I set off on my Biggest Dartmoor Challenge Ever.

So, having said I would trigger phase 2 of my training what I really meant I was going to jump straight into phase 3.

What a shocker and a wakeup call!

I think I have just realised how much I need to train and get moor fit with a pack on my back for 14 days. Ouch!

So, the target was to walk approximately 30km with a minimum of 20kg’s on my back, just to start to get a feel of the challenge ahead. Well, I walked 27km, basically because I forgot about going to Nat Tor and inadvertently cut it short. I was a bit hacked off when I realised, I hadn’t made the full 30km, oh well, there’s always another day. Oh, and I weighed the bag when I got back at 21kg’s so at least that was in the right area.

Lydford car park opposite the pub was my starting point, looked like the pub was busy getting things ready for some limited re-opening on the 12th April. Suited and booted with an extra layer, felt rather nippy, I swung the bag on. Wow that felt heavier than I expected. It had pretty much everything weight wise in it apart from food for 14 days so knew it would be around 20kg’s. Feels very different doing step-ups with that weight versus walking out with it, but it still felt heavy. Not a good sign, but at least it was a training exercise!

Up through the village, I must have looked like a turtle bent double trying to get the pack balanced, to the Granite Way. I was going to say a steady walk out to Sourton but on reflection I think it was harder to walk on the path than it was across the grass and tufts of the open moor. Maybe I just had more distractions out on the moor.

Anyway, the place seemed deserted, almost eerie. I passed one family of three, their daughter learning to ride her bike. Good job she was in control because I didn’t feel I was capable of shifting out the way too quickly.

With a lot of fidgeting and talking to myself I arrived at Sourton, I actually didn’t feel that bad once I had got into a rhythm which did surprise me a bit.

We all know that not all tors are identified on the OS map so why in anyone’s name did they decide to put East tor on it? I haven’t precisely located it yet but I do know it is not far from the Granit Way path just short of Sourton. The trouble is I have to drop down from Sourton tor to bag it and then back up again, the shortest route.

So, for the first time I’m heading from the village up the West side to the top. And then the weather turned, ominous dark grey clouds. There was no escaping this one, a straight line to the top. It didn’t take long to realise this was going to be a tough bit. Anyway, the tors were in sight as the hail started to drop, looking behind it was only going to get worse so headed for shelter. Only then I discovered I was only half way up, what sort of trickery is this? Well, I may have used a slightly different set of words in my head!

The side got steeper and the weather worse, I was determined to reach the top for coffee. Hail, then snow/sleet too late for leggings just need to reach the top. Pushing past a dozen ponies, who actually couldn’t care less, ignored me and carried on grazing. Of course, they’ve seen it all before.

Made it, huddled under an overhanging rock, shuffled around to avoid dripping water down my neck and poured my coffee. I deserved it; it was a tough short climb. Then it all stopped and the mist rolled in, as it does, everything disappeared. Walking from memory with a little reference to the map I was now in full navigation mode and getting ready to walk on a bearing.

Then about thirty minutes later it all disappeared and returned to cold and overcast. OK it was a long coffee stop, paid off though didn’t it! 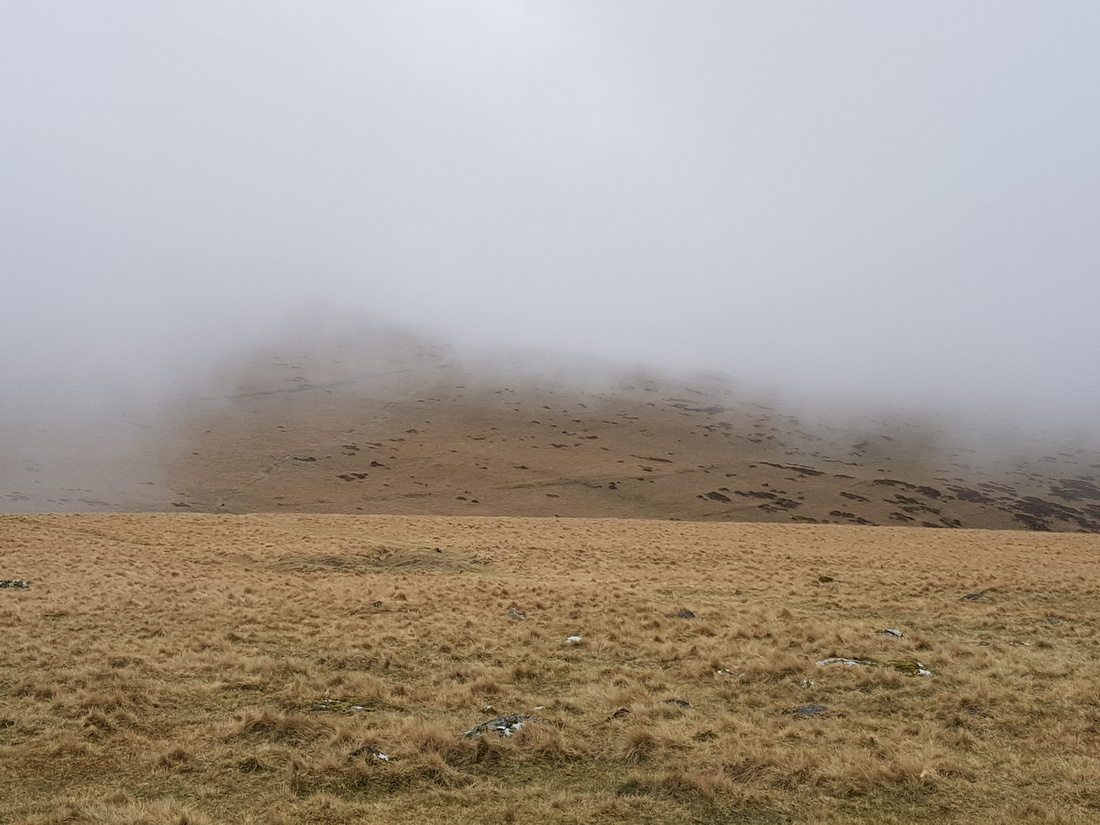 Gren tor was next and other than walking on an initial bearing and the usual tracks and tufts was pretty uneventful. I will confess though; I’ve never nailed the logan stone and there is a small out crop that could confuse you. Maybe I’ll pay more attention next time just to say I nailed it. Hunt tor is just a bit further on, same thing, other stones around, so you could get easily confused. I have been there before so knew what to expect so it wasn’t an issue. Both these may be difficult in a thick fog if you’re not careful.

Steng-a-tor, ah yes that tor overlooking the impressive West Oekment river. Try it from the North or the West and you are sure to run into trouble unless we are in the middle of a heat wave. Last visit was a pain staking, very wet and boggy attempt from the North. Water over the boots and thoroughly unpleasant.

So, I decided to attack from the South taking in Kitty tor first and following the track down. So much better but still a bit boggy on the final approaches. But there are some fantastic view points from here, some might say worth a soggy boot.

Back to Kitty tor with the very distinguishable huts and flag pole then a straight line to Green tor. You may be mistaken looking at the map as there appears no indication the area is boggy. I can assure you it is relatively flat and holds a lot of water. Nothing to scary but something to be aware of, don’t get caught out! 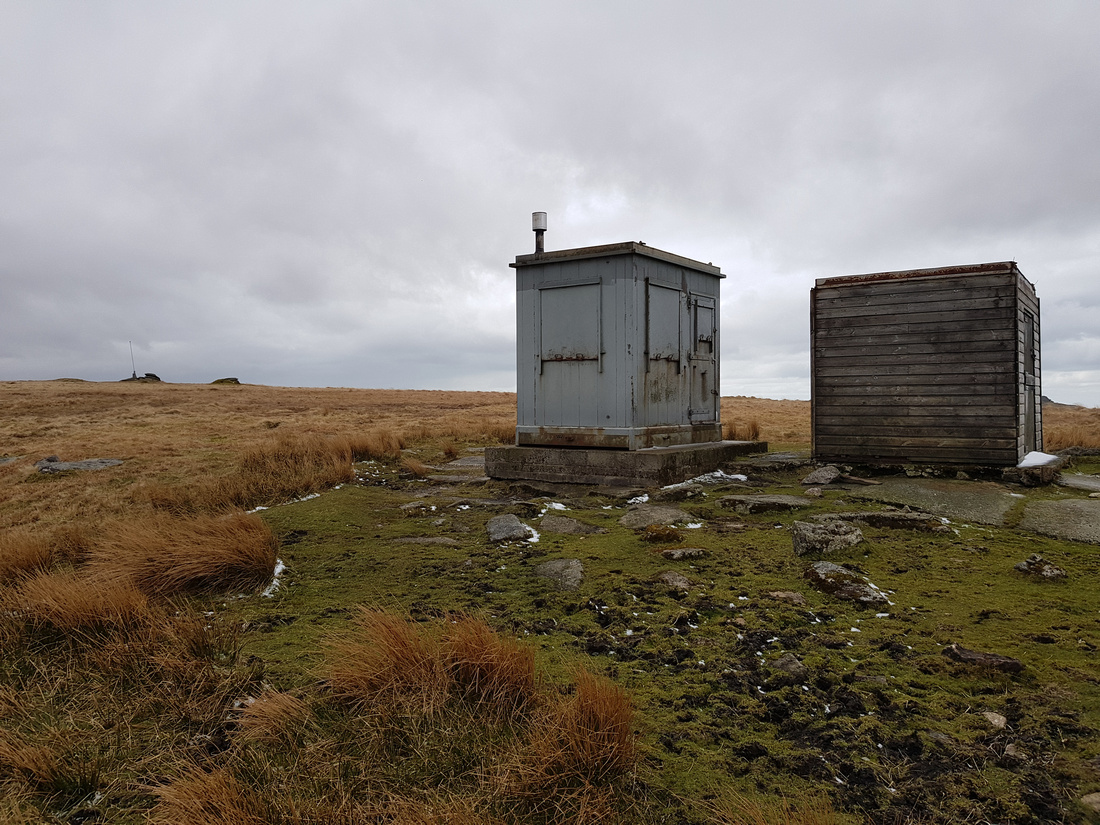 A quick hop down to bleak house, and boy was it looking bleak today. Across the river, there’s a few places for a relatively safe and easy means to cross and up to Dunna Goat tors. From there a simple straight line to the Links tors, these are among my favourites. In the right light they are so dramatic looking and have some superb views. Go take a look, you won’t regret it.

Arms and Brat tors are within easy walking distance once you have negotiated the rocky slope from Links tor. This could so easily be a place where a nothing accident turns into a call out for the rescue team. One wrong foot and your ankle could quickly be in trouble, or worse.

Brat tor is quite impressive and distinctive with Widgery Cross perched at the top. Anyone unsure of their location who can see the cross will soon re-orientate themselves, almost as good as the North Hessary tor mast.

I’ve never been to Doe tor and was unsure of the river crossing. With careful picking between the rocks down from Brat tor head straight for Doe tor, there is a couple of large boulders in the river that make an easy crossing, that was good to know!

Now I’m not sure why I didn’t take in Chat tor on the day but decided to go straight up the side of Hare tor. My word, that takes a bit of effort. I may have to change my order slightly on my challenge and head to Doe, Chat, Sharp, Hare and Ger tor to avoid that horrible direct route to Sharp and Hare tors, the direct route will use up a lot of energy.

Anyway, today I headed from Hare tor across and through the firing range, never done that before either and wasn’t entirely sure if I was supposed to. The fact a security guard leaving one of the buildings ignored me I assumed it was ok, providing they weren’t firing of course!

Down to the corner of the access area and onto a footpath that took me to the main road, some fast traffic uses that so you need to leg it across quickly. No roadkill bunnies today!

Continue down a bridal path through a very nice field and wooded lined track toward the river. I decided to hang right at the small woodland area and cross the river Lyd over a wooden footbridge. Up past some houses, left and out onto the road by the memorial cross back into Lydford.

Never knew the bridal and footpath existed so another first. It’s great when you just wander around and come across these little gems.

Anyway, my first training walk completed. Overall, I think it went pretty well. I was surprised both at the beginning and the end. What appeared to be a heavy bag at the start but seemed to get used to it somewhat by the end, so happy with that.