My biggest Dartmoor challenge EVER - Blog 15

The forecast for the day was very mixed so anything could happen!

Parking in a layby right next to a footpath I quickly made it up the hill to Crockern tor, I’ve always wanted to find the “chair” but today I was on a mission and potentially time was a critical factor. At that point the weather decided to make it’s first change, dark cloud and big, heavy raindrops started to fall. It wasn’t a difficult decision to get the full wet weather gear on.

Littaford and Longaford on a nice day is a very pleasant stroll but today Dartmoor looked like it was going to play weather games as the rain turned to hail. With a head wind this was starting to feel like a free acupuncture session!

No time to hang about, I wanted to get the best start I could and headed straight for Higher and Lower White tors and down to Brown’s House ruin. I must have looked a sad lonely figure leaning into the wind walking against the hail which then turned to snow as I crossed the horizon between the tors.

With the relatively dry weather I was quite surprised on how wet it was under foot, although the approach to Brown’s House has been significantly wetter in the past.

I’m not sure why, perhaps being pre-occupied by the weather and the need to move forward, the pack felt surprisingly light! Have I turned a corner in carrying the weight? I also made that point in record time, under an hour.

Feeling good about progress despite the weather I headed straight to Rough tor, simple path to the river and crossed with no issues. Although the levels were pretty low. The hill the other side is a slog and suddenly the bag weight reminded me it was still there. I’ve done this section a few times now so knew what to expect, it doesn’t make it easier though.

Next, for me at least a killer circular. Crow tor, Bearsdown, Lydford, Connies Down, Devils tors and back to Rough tor.

The route to Crow tor is, well as you would expect, trudging across open moor terrain but not significantly difficult. Again, the river crossing with the levels low was nice and easy. I always try to speculate what it would be like in full flow, just in case, but here I think even then it would be good to cross with care. Another hill and bit of a slog up and across to the Bearsdown tors. Which one to pick to say I’ve hit the tor? Well, I guess the only one that would remove all doubt is the one with the flag pole on it, so that was the one I made for.

The quick trip across to Lyford tor was nice and easy plus the snow and hail had disappeared, just dull cloud at this point. On a good day this area is a fantastic place to wander around, generally straight forward to move between the tors and offers some stunning views.

From Lyford I chose to handrail the wall down the hill toward the river and join the footpath at the gate to move North and head for Connies Down tor. At river level this could be a bit tricky. There’s a lot of wet down there with the water run off into the river and where the Cowsic and Connies Down waters meet so care needs to be taken getting across.

Now the shortest route is always my first choice but, with taking safety and terrain into account. So straight up the side of the Cowsic valley and straight line it to Connies Down. It’s a tough short sharp climb but with a couple of stops on the hill it saves a bit of time circumnavigating the hill.

Now at this point I have to be honest I had a slight panic moment, gun fire and it seemed really close! I was well into MOD firing range territory and had a sudden attack of doubt. Did I get the firing times right and should I be anywhere near Connies Down? Fortunately, there was a phone signal and a quick check confirmed it was only Willsworthy firing that day. It could have really changed my plans for the day! Anyway, the weather took a turn for the better and decided lunch looking down the valley would be a good idea and a quick video update stating at that point everything was going very well. 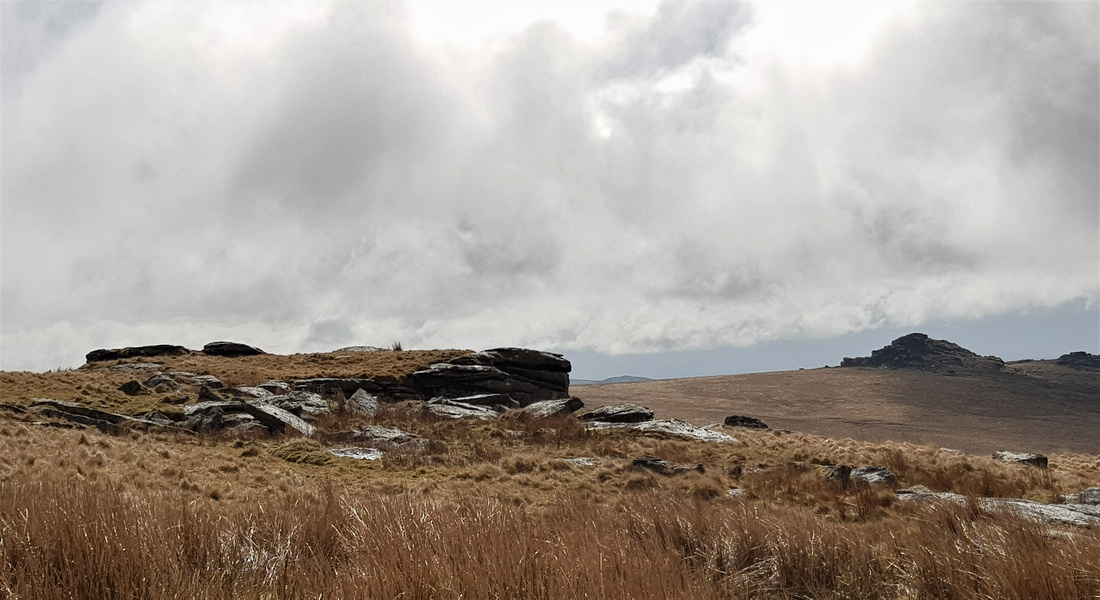 So, onward and down the steep valley side of the Cowsic and up the other side to Devil’s tor, and that’s when it happened. The river here can be crossed with care so I took a bit of time looking for the best place to cross.

Here we go, a “bum” slide down to the river, a foot on a small stone and step across two large boulders, nothing too difficult. It was here my bag decided to give me a lesson on “respecting your bag weight”!

That innocuous little stone that looked so solid decided to move, not much but enough to turn my body and shift the weight in my bag. It was too late to change as my body weight was already committed. Trying to right myself the bag weight took me and yep ended up sat in the river.

This could generate a lot of discussion around safety however I think my risk assessment and plan to cross was about right. When I did go in, there were no other rocks around to hit, the water was slow flowing at that point and was only a foot deep. So, the resulting damage was more to my ego than anything else, none the less a valuable lesson learned and why planning trips can be so useful.

What made it worse, there were a number of ponies the other side and the minute I went in they all seemed to “winnie” as if they were laughing at me. Maybe they were, I must have looked a right clown!

Soaking wet down one side and boots full of water I clambered up the other side of the valley, it seemed to take ages as I dissected how on earth, I allowed myself to fall int the river, my first “Dartmoor dunking”. It was a good job I had full wet weather gear on as this seemed to minimise my soaking quite a bit.

Devil’s tor, easily identifiable by the large standing stone just off the tor greeted me at the top of the hill. I felt good for a split second as the walk down and up the valleys sides didn’t excite me!

Devil’s tor to Rough tor to complete the circular. This was surprisingly arduous and very wet and boggy so a straight line isn’t that easy. That said with boots full of water it made little difference so a straight line and a lot of muttering was the way forward.

Now for a section I had done once before so knew what was coming. I decided to follow the flag poles to Flat tor and on to Fur tor which navigationally is really easy, well at least in good visibility. The terrain is not that bad but just very tiring, tedious and gets leg sapping after a while. But it did get me to Fur tor without any further incident. Fur tor is always a fairly significant point, partly due to its remoteness but also on this trip it was just over half way. Just need to get to Sittaford and the worst is over. 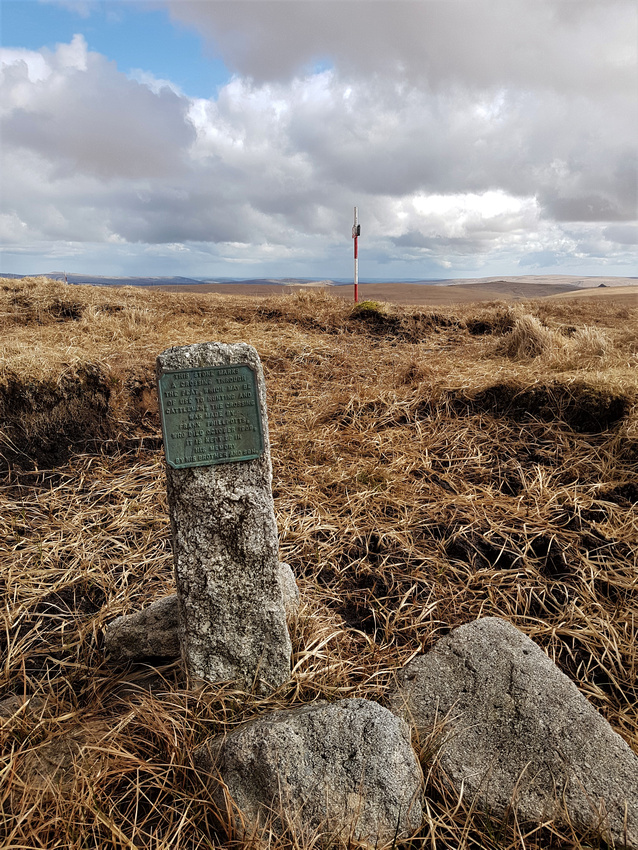 The route to Sittaford, hmm, flag poles played their part again until they hit the “corner”, roughly below Quintin’s Man and then a straight line to the tor. I’ll save you the details but basically this is an awful route in and I need to see if I can find something a little less time consuming and tedious!

If the weather closes in the going between Devil’s tor via Fur tor to Sittaford will test the best of anyone and will take considerable time so here’s hoping for some decent weather on that day.

The weather was definitely getting better now and was turning into a really nice evening so getting down to Postbridge should be easy and pleasant. Through Grey Wethers stone circles, follow the path and head up to Hartland tor for a coffee break, for the first time that day it felt perfect! I was still doing pretty well with the bag weight, drying out and the sun was out. A short time to stop, stare and listen. Could have spent ages just sat there.

At this point I did start to wonder how far I had travelled precisely; I could work it out I guess but it was the time that suddenly became a point of interest. Eight pm, walking for some ten hours, so an average of three km per hour was 30km already. I still had to get through Postbridge and back to Two Bridges.

Best get going! Down into Postbridge, across the bridge and follow the road to a footpath into the Powder Mills. Ash tor was easy to find but a bit further up on the hill than I had expected. Back on the path through the Powder Mills and take the path up to Littaford. It was then I hit the “wall”. It seemed a long trudge through the Powder Mills and up the other side to Littaford, the light was starting to go and I was starting to hurt for the first time. It took longer than expected to get to this point now eleven hours in. 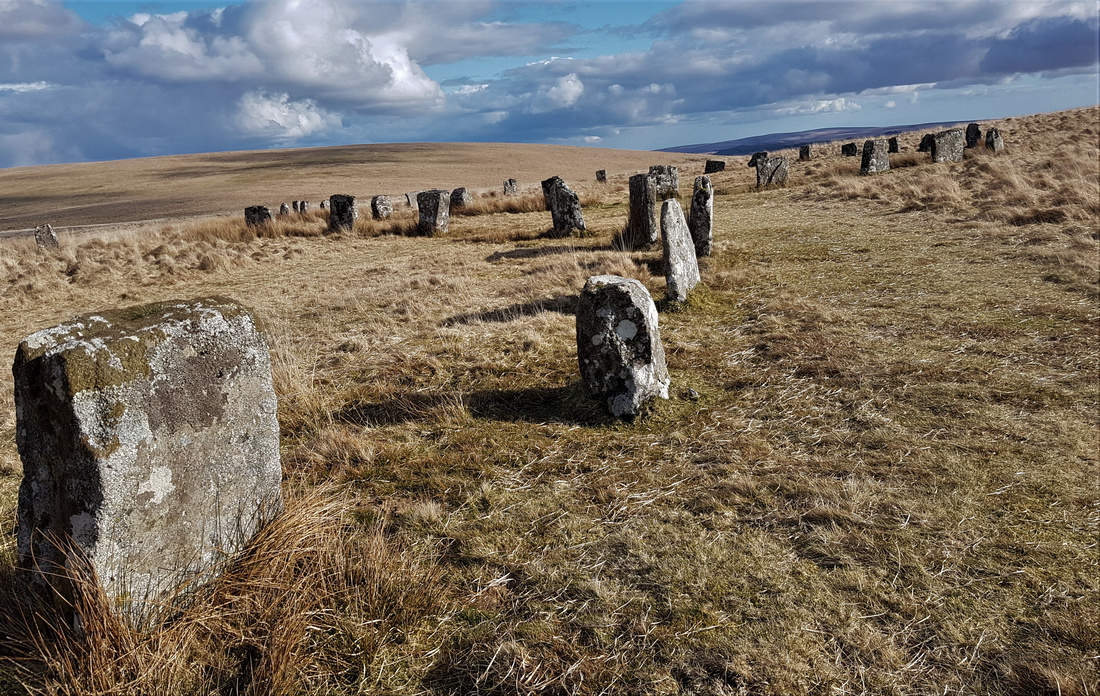 Now, here’s the thing, when you approach a tor from a different angle everything looks rather different. I didn’t recognise it as Littaford, but it had to be! I wasn’t in the mood now for mistakes now and light was really starting to fade so yes, I took the lazy option and did a GPS check. It was Littaford.

Just a straight line back to Crockern tor and I was home and dry. By the time I reached Crockern it was almost dark and probably should have taken the torch out, but with just a couple hundred yards down the hill I carefully picked my way along the ground and made it safely back to the car.

I’ll be honest, I did feel a bit of relief I made it back despite it taking an extra hour than I expected as a worse case time. I also noticed I had clocked up a shade under 40km in just over twelve hours of walking, it would be interesting to analyse the route details when I get home.

Job done, proof I could walk for over twelve hours with a bag weight of roughly twenty-one kilograms and get back in pretty good shape. If I was told how the day would unfold before I started, I would have bitten your hand off for that result!