My biggest Dartmoor challenge EVER - Blog 16

Today compared to the last outing should be a much more casual walk with the weather forecast to be so much better apart from rain coming in around five o’clock.

I had mapped out a slightly shorter route of thirty kilometres which in reality probably means it could be anything between twenty-five to thirty-five kilometres!

Setting off from Norsworthy bridge around nine in the morning which was a relatively late start. Pack on, it felt heavy today and I could still feel the effects from the previous walk of forty kms. The walk up to Down tor is normally easy however this morning I felt sluggish and found it difficult to get into any stride.

With a couple of stops along the slope I reached the top.

It was what Dartmoor does best when the sun shines, delivers glorious views. It was very still and no one about, just the sound of the sheep in the background and the birds flittering about singing in the morning sun. It would be rude not to stop to enjoy a very special moment, priceless. 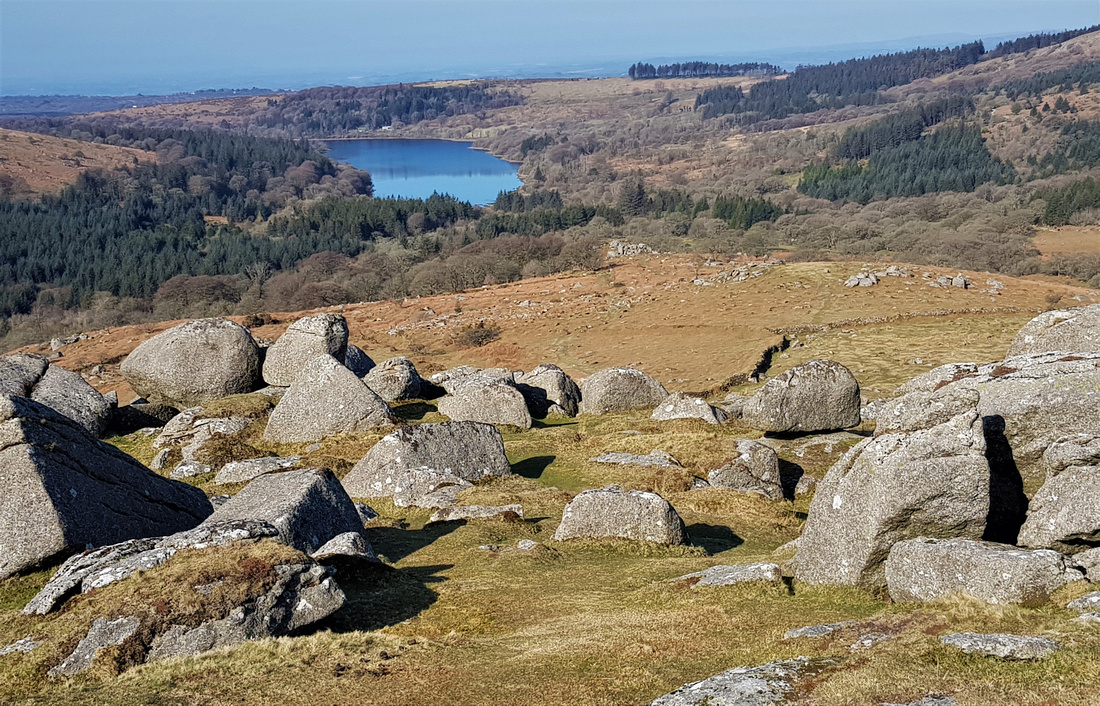 Despite such a fabulous start to the day you can very easily lose track of time so being conscious of this I headed across to Combshead tor. A nice easy straight-line walk, perfect to enjoy the fine weather and almost utter silence.

The next stop was Eylesbarrow. I was contemplating a direct line of sight approach but as always with half a mind on what I would do if the mist was down, I decided to do a little navigation exercise to physical features where a positive bearing could be taken if required. So, first point was the stone row, or more precisely the cairn at the end of the stone row. Followed by the end of the girt leading away from Combshead tor, from that point a bearing to Eylesbarrow.

The most interesting of the three bearings was the last one as Eylesbarrow is not visible from the girt so I felt happy my bearing delivered me within a couple of meters of the marker.

Then onto Higher Hartor tor. In clear visibility it was difficult to walk a bearing as Hartor is clearly visible and the temptation to head straight for it, well, just too much to resist! I did meet a couple of small groups along the way to sell the virtues of the search and rescue team and not so subtle sell my challenge to them! Lower Hartor is just a short drop further down the hill. As expected, the route was not providing any unexpected concerns so off to cross the Plym at Plym Ford.

As with many other rivers the dry spell had significantly lowered both the height and the flow so crossing was very easy. Calveslake was an easy walk to reach and a good point for a lunch stop. No one around, the sun was still out with a gentle breeze. Very relaxing!

The next stop is Shavercombe tor and there are potentially two routes to be taken. First you could navigate around the tributaries to the Plym, go back along part of the Abbots Way and then toward the head of the Langcombe Brook, followed by the boundary stone then the trig point and then down the left side of the Shavercombe Brook. This way it keeps you above any boggy ground and crossing the brooks, the down side is that it adds a fair bit of walking and time to the day.

Alternatively, you can walk a near straight line. Well, on this day with the ground being so dry a direct line was very achievable. However, if the weather is poor and following a number of days rain the direct route would prove very boggy and challenging to navigate through and likely take more time than walking across the top of the moor.

So basically, either route will do but is totally weather dependent.

Hen tor and onto the Trowlsworthy’s, didn’t deliver any surprises, apart that is from the gun fire and smoke everywhere! The military were out and training, you could hear the commands being shouted out, firing and smoke bombs being set off. Common in the area apparently but I’ve never seen an exercise undertaken like that before, just soldiers undertaking navigation previously.

The only real challenge of the day was going to be crossing the Plym again on my way to Legis tor. I did find a place by the pillow mounds. A very cumbersome and not very eloquent stepping and sliding across the rocks, must have been a sight for sore eyes but I was determined not to take a second Dartmoor Dunk! 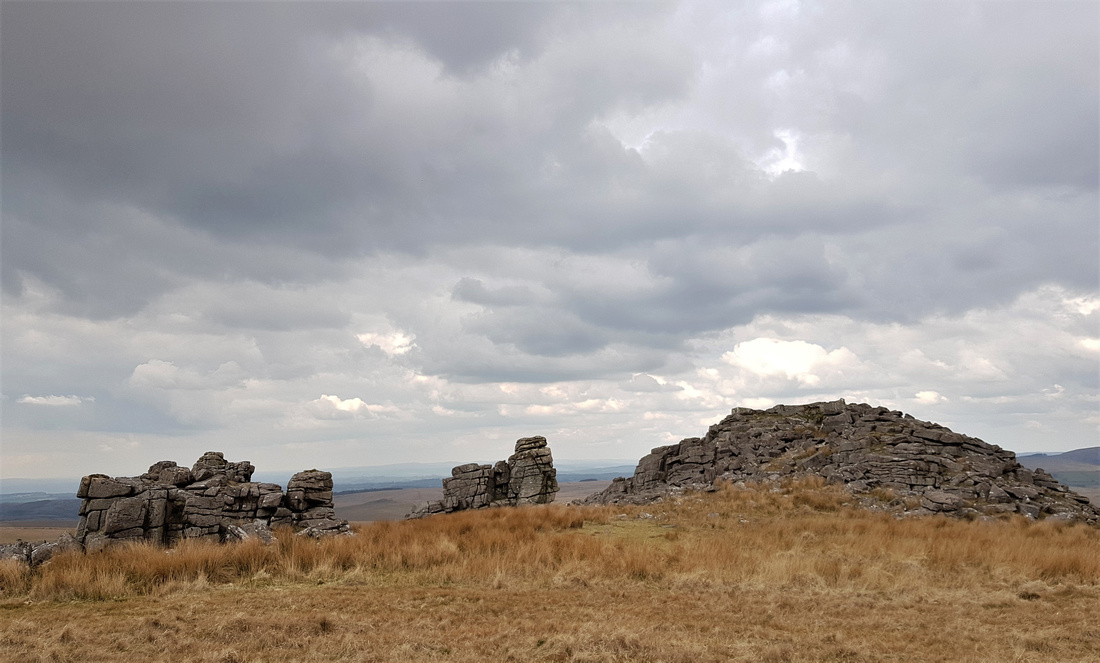 Legis tor was just a walk up the hill, where I happened to bump into one of the Army team setting up a comms point. A very interesting chat about the comms and my challenge, which at the end he surprised me a bit by saying he wouldn’t do what I’m doing. Fourteen days fully self-supported with a bag weight of nearing thirty-five kgs. I wasn’t sure to be inspired by his comments or confirm my insanity! Either way he was impressed which was good enough for me.

Not wanting to appear tired or weak at that point I walked off looking more like Robo Cop giving the impression I was ready for anything! Trouble was, there was about two kilometres before I got out of sight and take a deep breath and collapse for a breather!

Gutter tor, a timely coffee stop and watch the exercises unfold in front of me. Just as the weather went very dark and started to rain, perfect! On with the wet gear and a short walk over to Eastern tor.

At this point I suddenly became aware of my left heel, a sharp pain was starting to make itself felt, having had this in my right heel many years ago I knew exactly what it was and it wasn’t good news.

The common name is “policeman’s foot”, I guess because they used to get the condition by walking the beat years ago. If you’ve had it you know it gets very painful and will eventually stop you walking unless you get it treated or unusually it disappears.

With that now playing on my mind I decided to track across toward Sheepstor via the scout hut and follow the leat to the edge of Roughtor plantation, take the footpath down to Narrator brook and follow the path back to the car park. 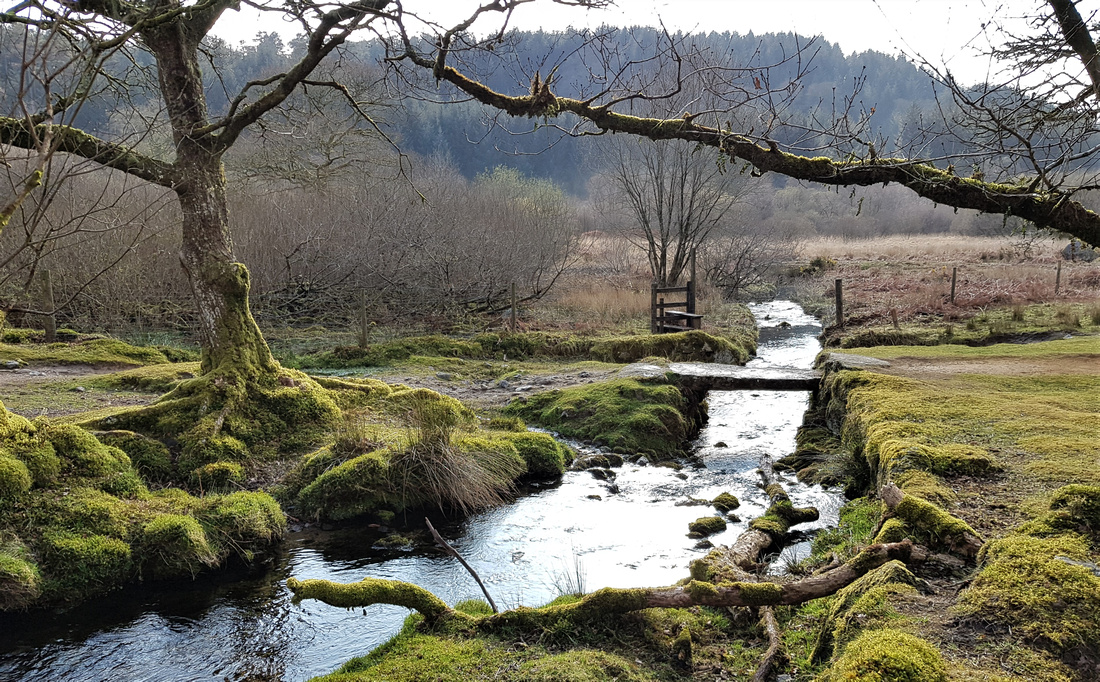 Apart from the last hour this was a relatively straight forward day taking nine hours, longer than anticipated due to the heel and stopping to chat along the way! Just about retained a three km per hour average speed and covered twenty-five km so not too bad under the circumstances.