My biggest Dartmoor challenge EVER - Blog 17

A slightly later start today at around 9:45 am, I really should try and get up earlier. It did raise a slight doubt, would I get around quick enough. The route was actually 27km on the planner but time allowing and my need to hit every tor on route probably means it could be up to 30km.

The terrain and route approach to the tors were largely, straight forward. Comfortable is a relative term, overall, feet were tired at the end as were my shoulders but considering I’m packing roughly 42 pound in the pack I think it is inevitable I’m going to feel it, particularly after only 5 training days!

So, Princetown out to South Hessary along what I call the walk of doom, mainly because it’s such a long track if you follow the whole thing. Sharp right over the open moor and tufts, across a small stream to Hart tor. Normally this direct bearing would take you through some very wet and boggy areas but with such a dry spell everywhere was bone dry. I could hear the grass crunching under my feet as I tramped my way across.

Another straight line to Devil’s bridge to cross the main road and up to the old railway track. A small climb but even at this stage the bag weight was acting up like a petulant child, nagging at my shoulders letting me know it was still there. Another walk of doom following the track all the way to Foggintor quarry, I think walk of doom because there are no navigation distractions and you’re just head down following the track. OK the views are great but I have one thing on my mind today, get the distance and time in!

Foggintor, tick, wasn’t going to do this originally but what the heck, it’s so close. 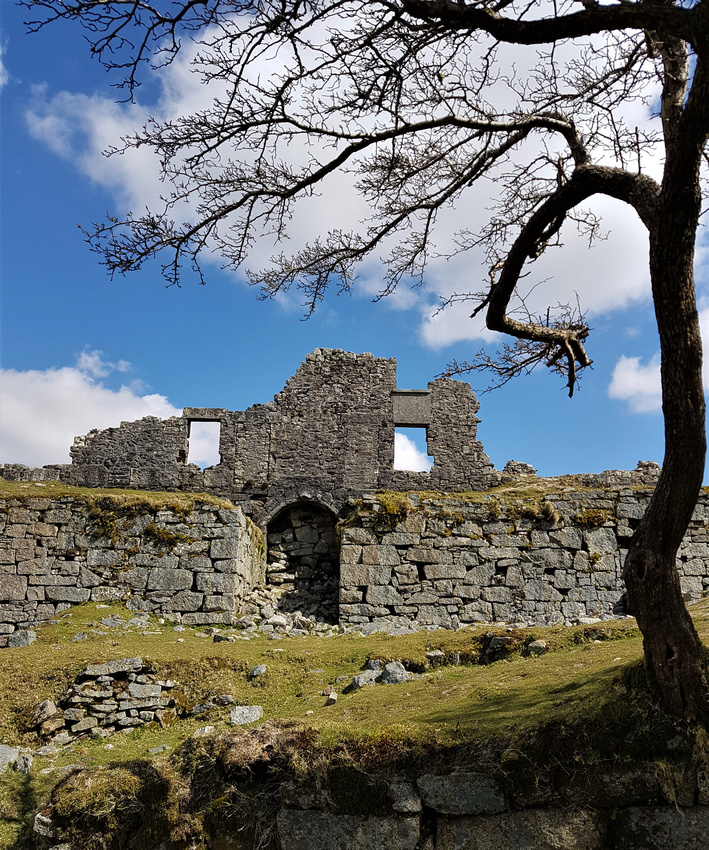 Onward to Swelltor, simple case of following the track up to the quarry, just as impressive as the previous one, maybe a touch better with its two-tier layer of quarrying?

Swelltor to King’s tor is another simple track and not far away, so easy to quickly bag another! From here this was quite interesting because it wasn’t until recently I found where Hucken tor actually was. As a result, I discovered you can reach it by walking from King’s tor to the outcrop just below across a couple of fields and into the area of Hucken tor. The best thing is, this also allows you to drop down onto the footpath that takes you down to Merrivale. Very handy if you’re looking to make up a circular walk.

From Merrivale a simple task of taking the first footpath once over the bridge and left to head toward Vixen tor. Not opening any debate here, but following the wall is the closest I can get to this one. Again, more straight forward walking to Heckwood tor where I met some youngsters (well anyone younger than me now are going to be youngsters despite them actually being “young adults”!). Had a good chat and later found they had made a donation, brilliant. Pew tor and Feather tor followed and then to the car park at Pork Hill. Which was really busy along with the obligatory ice cream van of course. No, I didn’t before you ask. 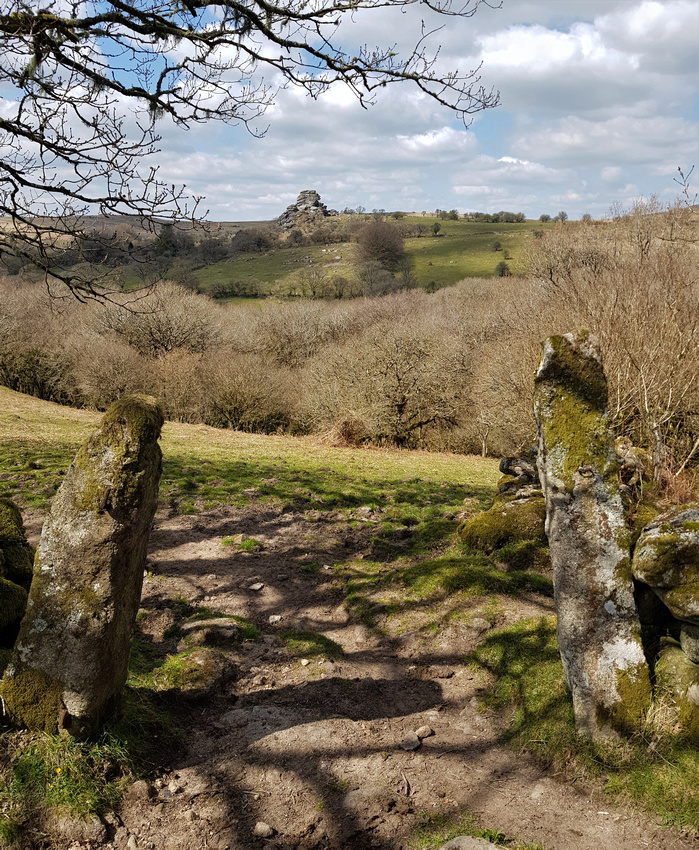 It was still a glorious day and I felt like I was doing a reasonable speed, although it will never feel easy, that’s the nature of a challenge, I guess. Up to the top of Cox tor, now that is a stiff climb I think, took a couple of breathers on the way but still got there without any major issues.

Roos tor and the Staple tors were quickly “captured” and then the decision regarding Great Mis tor. Do I cross the river Walkham? Well, I have tried a couple of times and I really don’t believe, particularly with a full bag weight, it would be responsible or safe to try. So, down to Merrivale again over the bridge up the hill and across to Little Mis and Great Mis tors. Now that took it out of me.

We’re now roughly seven hours in and the feet and shoulders are starting to ask for a break! Suddenly I felt like I had hit the wall for a while. A quick water and snack break just to ensure I was topped up for the final push.

Avoiding the main path from Great Mis I hung left and followed the track hand railing the wall all the way down to the road. Again, this area can get incredibly wet but the dry weather meant it was totally dried out. The only thing I had to negotiate were two nutty sheep, that, which ever way I went were determined to stay ahead of me bleating most of the way down before they finally decided to make a run back past me when they ran out of track. How on earth do their brains work!

Cross the main road at Rundlestone and up the road/track to North Hessary radio mast. 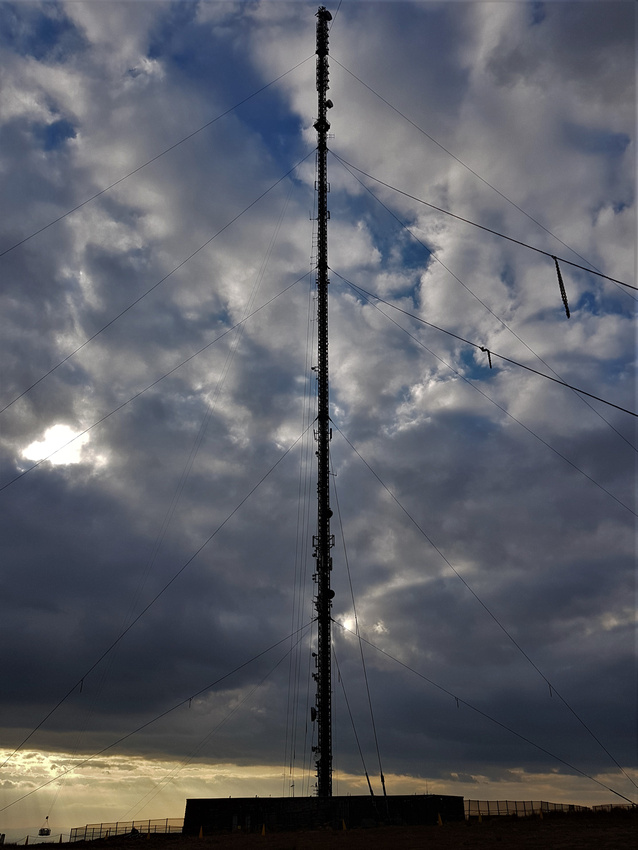 A quick right turn and walk to tick off Rundlestone and Hollow tors and then head up back to North Hessary.

Time for some useless information. I installed the telephony system in the BBC building many years ago when I worked for BT. Apparently, I did such a good job they wrote a letter to the chairman. Ah, those were the days when effort and quality work was recognised!! That’s it no more self-indulgence.

Looking around the outside they must be doing some maintenance work as there appears to be a chair lift connected near to the top of the mast. That’s some lift to work in the morning. Looking at the size of it, the wires it travels on and the height it will reach I’m glad I don’t have to use it! 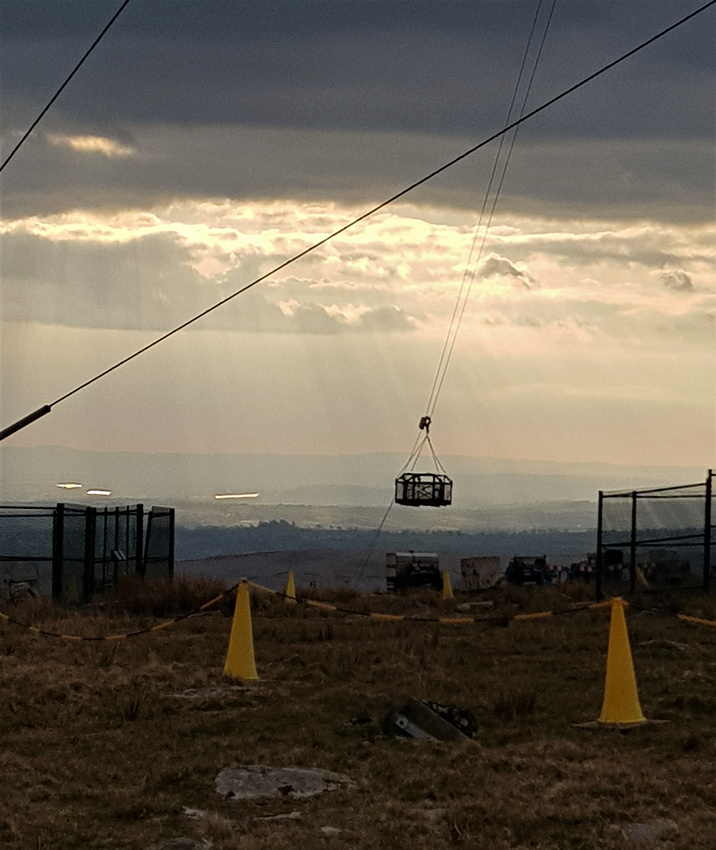 At this point I could feel myself slowing down. The left heel was also starting to literally become a pain in the foot again despite taking a couple of pain killers to see me home over the last couple of hours. While not too bad, it seems a visit to the Doc’s could ultimately be the only option, we’ll see.

At last, and nearly nine hours of walking I was almost back to the car, just down the hill and into Princetown. The mood lifted as I reached the bottom of the hill during a chat with a lovely gent, I was happy to spend a few minutes chatting and take advantage of the breather! Another great and pleasant surprise he also made a donation. It really is great when this happens and they drop a note when donating saying where they met me. Putting faces to donations brings the whole challenge to life.

Round the corner and back to the car.

Making sure I turned off the GPS devices I checked that I had clocked up 9.5 hours and 31km. That fits nicely in with what will be my schedule on the challenge, I just need to add in the food weight and repeat for fourteen consecutive days!

Blimey, I’ll pat myself on the back for the day and think about the challenge later, convincing myself that after only five thirty km walks training, I was actually doing pretty well.

I’ll settle for it today.