My biggest Dartmoor challenge EVER - Blog 19

It’s time to invade the North! Well, start from Belstone at least.

There were a few things I needed to investigate during this training walk. How accessible Steeperton tor is from Oke tor, can I camp at Oke tor and does Bracken tor exist?

As it is also starting to move into the “more open wild” side of the moor I was expecting this to be a bit of a test with a decent bag weight. I also wanted to test out a dehydrated food bag so wanted to keep the distance around 25km to accommodate the time to cook the food.

I have been here before but couldn’t recall if I actually attempted Steeperton, I don’t think so, we’ll find out. The weather had a real haze to it and it looked like it could turn to a low-level mist or fog so bearings were taken along the route just in case it suddenly dropped. While it also remained fairly sunny through the haze there was a pretty strong chilling wind which made for interesting walking at times.

Starting at the car park it was a straight forward walk to the access the moor at Watchet Hill and then onto Belstone tor. Apart from the extensive rocks lying around and being careful not to trip and do any damage it was a simple climb up, over the Irishman’s wall and onto Higher tor. Winter tor is close by but that will be bagged on the way back.

The walk out to Oke tor is via a track and is very easy to follow and walk with very flat terrain. It also looked reasonable for camping although the East side was the best side if camping by the tor, and weather permitting!

Steeperton is relatively close and most of the way depending on your approach is by a track and metalled path, I assume one of the many used by the military. Now this is where my memory comes into question! The path I had in my head didn’t equate to what I was following so quickly came to the conclusion I was thinking probably of the path to East Mill tor and New Bridge. I could see the path continued to a point where it would eventually cross the river but this looked a fair distance away. Decision time, do I follow the path and then cut back up the slope or do I find a suitable point to drop down the valley side, cross the river and scale the hill.

As the weather and visibility was pretty good now, I decided to take the challenge and scale the hill. A sharp drop into the valley and down to the river, this was something like a 1 in 3 drop and I was quickly realising with a full pack this may not be a good option. The river was low but I think could still be crossed at the point I found if the levels were higher which just left getting up the other side.

At this point I started to work out why it may be OK today, but on the challenge, it would potentially pose a risk. The first fifty meters appeared to be almost vertical and required a precarious scramble to reach a point where I could stand up (more like lean forward) and start walking toward the top. The sheep in between their grazing looked up at me as an intruder and probably wondered what the heck I was doing. I’ve often wondered how sheep think, or don’t, they were probably wondering what was in my head as I took several breathers to reach the top! It took a while and some effort; this wouldn’t be a good choice in poor or wet weather. Longer may be quicker in this case.

It was blowing hard at the top and at this point I realised why my bag weight appeared to be very manageable. I had thought I may have turned a corner and things were suddenly getting better, but a school boy error revealed I had left the extra water for weight at home so was carrying two kilos less than I should have been! So, now needing to slightly ration the water I did have I was unable to test out a food bag for lunch. Flipping good job I took a back up of sandwiches just in case the stove didn’t work. Genius move!

To ensure there was a route up and down Steeperton I decided to take the long slope route down and pick up the track back to the river crossing made up of stepping stones across the ford. That pretty much put me on track all the way back to Oke tor. It will add some distance and time to that day’s walking on the challenge but safety must take priority, I guess. Unless the weather is really good and allow the short cut I tried.

Arriving back at Oke tor the military were checking recruits in and out during a navigation exercise. It gave me some comfort that a few of them appeared to be finding it a challenge. Or was that just me wishful thinking!

Winter tor is just off the hill from before Belstone tor and easy to get to. A simple walk following a stony track to the bottom of the hill and across to Scary tor, nothing scary at all about it.

A good chat with some lovely ladies from a rambling club, a spot of lunch and back on the trail!

Down to Gulliver Steps and up over the hill to Row tor, nothing too difficult, just a drag up the hill following more stony paths. The stones on these paths were now starting to have an impact on my heels again. Apart from tuft hopping which is just as awkward the paths were the obvious choice, but boy was I getting tired of rolling my boots over loose stones.

Along the way I spotted some small concrete “boxes”, interesting, they could be used for food drops I thought?

The weather was slightly improving with the haze disappearing but the wind was still gusting and a bit annoying. A straight a simple direct line across a stream, a path and up the side of Eastern Mill tor. Hmm, couldn’t see a better way but it was an effort to get to the top. Just a matter now of getting down the other side and heading toward Moorgate cottage via Black Down. It may have been easier to back track down the side I ascended and used the track. No, I went for the awkward option and took a slow decent through stones, boulders and holes being careful not to snap my ankles until I reached yet another track full of those damn stones!

I was now starting to look for Bracken tor, luckily, I had a quick chat with someone close to Gunnery Lodge, otherwise I may have missed the road that was tucked in behind the junction over a cattle grid. I could have wasted a lot of time had I missed it!

It was easier to spot the road than it was Bracken tor! Spent some time criss crossing the hill and only found a small number of rocks that would never surely attract the title of “tor”. Some quick investigation work from the FB Dartmoor 365 group and the consensus is, there is no Bracken tor and the reference on the OS map is associated to the youth hostel. It sort of makes sense as there appears no marked point or outcrop distinguishable to a tor and the letter “B” sits right next to the red triangle of the hostel.

Oh, what a tragedy, that means I can knock it off my list and save up to an hour. Now that was worth the effort to confirm its existence!

From this point it is relatively easy walking (unless your feet are dropping off!) following a track North/West of the East Hill and down to the Tarka Trail by the river. Follow the river all the way to the second footbridge before crossing it and heading up the hill to join a track back to Belstone.

Just a cautious note following the river, it does split around half way and you need to hang left to follow the path. No idea where the right fork goes at this point. But, be careful half way along the footpath, there is a section where boulder hopping is required and a small section where you need to negotiate a 45-degree slab of rock. It’s doable but care is required. You have been warned! 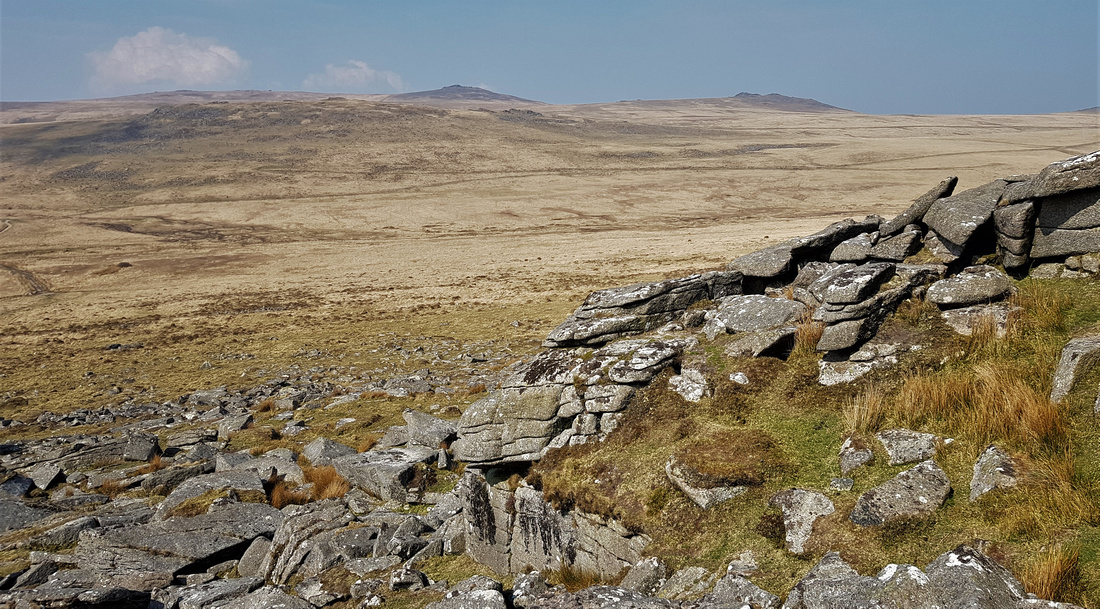 It’s a bit of a hill to join the path back to Bestone but guess you youngsters and anyone with a day pack would manage comfortably! Then back to the car park and a pat on the back!

An interesting day for lots of reasons and again met some really nice people who were genuinely interested in the challenge.